Newars are the indigenous group of Kathmandu valley that used to make almost the entire population of the valley before the Shah invasion in 1968. Before the invasion of the valley, the three cities of Kathmandu, Patan and Bhaktapur were autonomous Newar kingdoms and the latter two cities still have large number of Newar residents.

Untill Malla regime, the economic condition was stable and strong that gave the people to develop their skills in art, architecture and culture which is why these three cities are rich in cultural and architectural heritage. The language used by the Newar is called Nepal Bhasa, commonly known as Newari and has its own script and a rich literature.

Newa architecture is an indigenous style of architecture used by the Newari people in the Kathmandu valley in Nepal. It is a style used in buildings ranging from stupas and chaitya monastery buildings to courtyard structures and distinctive houses. The style is marked by striking brick work and a unique style of wood carving rarely seen outside Nepal. The style has been propagated by Nepalese architects including Arniko.

With time many Nepal is losing its art and culture. Nepal Pavilion Inn came into its existence with beautiful cultural souvenir. We are showcasing century old Newari Arts and Architecture for our visitors which are under its authentic value.

It took almost nineteen years of hard work and devotion for the collection of century old handicrafts and endangered arts to get this mini museum ready. We would be pleased to explain you in detail about the art that exists within Nepal Pavilion Inn. So the replication in our territory includes

Sanjhya –These three blocks of window in single platform is located at the centre of the façade and designed especially for the third floor. Hundreds of years and handmade but still is the matter of confusion about their made without any modern tools. We have the original display of this window.

Tikijhya –This type of traditional window is the best demonstration of Newari arts and architecture which allows lights and air passes inside the room but the passerby will not be allowed to see inside easily. These windows were hand made hundreds of years ago and it might surprise many architect with its making.

Statues – Some of the statues displayed inside the property includes Buddhist and Hindu gods and goddesses and some rare animals with cultural significance.

Ancient home appliances and tools – We have also displayed anciently used and utilized home utilities that are rear in this modern day. Totally handmade and are of great importance which are still found in the remote villages of the country. Spices box, grain measurement vessels, pickle grinder and many more.

We are here to welcome all the culture and art lovers who wish to know see and live with Nepalese Culture and Art.

What our Client Say

We had a perfect stay!

We had a perfect stay! The owner is very friendly and helpful, the room had a nice design and was clean! We can absolutely recommend…

We stayed in Nepal Pavilion Inn for 4 nights. It is very well located, close to some great sights and places to eat but still…

It's the best hotel service I've ever experience

The hotel owner Prakash liked to collect wood arts since he was 14 years old, he dreamed of owning a hotel by his design in…

Home away from home !!

Good Hospitality, Better place to be in, Fine touch of arts and craft. Highly recommendable while kathmandu visit.

Location of the hotel was very conveniant for almost anything. First floor room (sort of) facing the street thought it might be nosey at night…

We had a great time during our stay at Nepal Pavilion. Thank you to Mr Prakash and team. Very well designed interiors with traditional musical…

It was a good feeling

To sum up, our stay was Royal. We felt like we were in our own lovely home

I and my partner Donna had stayed in this hotel recently. It's amazingly built boutique hotel and apartment in Kathmandu. Sleeping here was not simply… 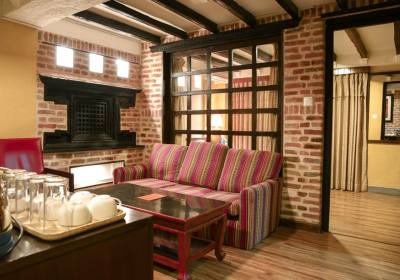